Organic Light Emitting Diode TVs aka OLED TVs are pretty new, but they’re quickly becoming a favorite TV option. I mean, the concept isn’t new, but since LG perfected it, their popularity suddenly spiked, despite their relatively high cost. Considering the performance, and the range of colors presented to you, the viewer, OLEDs are beating LCDs slowly but steadily.

After close to a week of research and comparisons, we came to the conclusion that the OLED55B6P, from LG, is the best 4K Oled TV currently on the market.

The similar acronyms OLED and QLED were initially used by two giants in the TV producing industry for remarkably disparate technologies. LG makes use of the OLED acronym while Samsung uses the QLED acronym. Other brands such as TCL started branding the top of their ranges as QLED TV’s late in 2019.

Samsung as the most popular TV maker in the world in recent years brands its best TVs “QLED” and have released a vast range for 2020 with 3 series that sports 8K resolution.

The 2020 range of LG TV’s consists of six series ranging from a relatively affordable BX to the super expensive 8K ZX to the hyper-expensive RX that can extract $60,000 or more from your bank account. Brands that have joined LG in branding their top sets OLED include Sony, Skyworth, and  Bang & Olufsen.

OLED stands for organic light-emitting diode and is a fundamentally different technology from LCD which is the most common technology being used today. LCD technology uses an LED backlight to produce light while OLED technology emits light produced by millions of individual OLED sub-pixel thus called emissive technology.

QLED stands for quantum dot LED TV and it is closer to the most often used LCD than it is to OLED. It produces images through a variation of LED LCD by adding a quantum dot film to the LCD “sandwich” of the TV. Quantum dots are microscopic molecules contained in a film and emit their own differently colored light when hit by light provided by the backlight.

That light then travels through a few layers including an LCD layer to create the picture. The LED source transmits the light through the layers to the screen’s surface from where the term transmissive comes from.

OLED is better than QLED, for most situations, as the colors are brighter, the contrast is better and the viewing angle is wider. The only time a QLED TV should be installed instead of an OLED TV is in bright rooms. As a bonus QLED TVs can also be found in larger-than-standard sizes and can be more affordable in relation to their size.

In this piece, we will introduce you to the OLED and AMOLED display technologies. We will discuss the common properties and what differentiates the two technologies.

OLED technology emits light produced by millions of individual OLED sub-pixel and called emissive technology. This produces a higher level of dark and much better contrast while consuming little power.

AMOLED stands for Active Matrix Organic Light Emitting Diode. The AMOLED works on the same principle as OLED, but it contains an additional layer of a thin film transistor (TFTs) to control the flow of current in each pixel. It contains two TFTs where the first one controls the start and stop functionality and the second controls the charging of the capacitors. There is no limit on the size of an AMOLED. It is thinner, lighter, more flexible than competitive displays such as LED, LCD. The higher refresh rates reduce its power consumption is lower than competitive devices.

To summarize the AMOLED is an OLED with an additional layer of semiconducting film to activate each pixel more swiftly.

Most people are familiar with High Definition (HD) television consisting of 1920 x 1080 pixels and known simply as 1080P. This technology is admired for its clarity and has set the standard for high definition TV globally.

The step up from HD TV brought us screens consisting of 3840 x 2160 and is known as Ultra High Definition (UHD) and more commonly referred to as 4K TV. The number of horizontal pixels leads to the reference to 4K. This recent technology is growing rapidly.

The question arises often whether there is such a major difference between the two technologies and if the naked eye can detect the improvement brought about by 4K.

The increase in resolution has enabled TV viewers to sit closer to a large screen and enjoy a clearer picture. It is recommended that you sit approximately ½ the distance away from your 4K TV then you were from your HD TV for the best viewing results. The clarity of the picture will remain the same but you will be able to distinguish the finer details on a 4K TV.

The use of 4K technology benefits everyone even when viewing the picture on a lower resolution screen. The improvement is visible to the naked eye provided you sit closer to the TV screen and your eyesight is still in good condition.

Our selection of the 5 best 4K OLED TVs for the money:

If you’re planning on refreshing your apartment with a new awesome 4K OLED TV (contrary to your SO’s vehement opposition to the idea), here are the 5 best TVs for you to choose from.

First up, we have the OLED 55B6P from LG Electronics. Like we briefly mentioned in the intro, LG practically holds the monopoly over the production of OLED TVs, and their products are the absolute best.

So, what does 55B6P brings? Like all OLEDs, 55B6P offers a stunning cinematic watching experience. The colors this TV produces are as vivid as ever and truly immersive. The TV has excellent contrast because OLEDs can achieve the perfect, pitch black. The TV is not as bright as an LCD, but it still produces a substantial amount of lumens, and, with the added contrast, it can display some really light colors.

The TV also displays amazing sound quality. The sound in 55B6P has been engineered by Harman/Kardon, so you can count on getting the best possible sound.

The TV also comes with 4 HDMI inputs, 3 USB jacks, 1 Ethernet, and 1 optical jack, among other things. The TV is 55 inches. Has Dolby Vision.

Despite the fact that the TV costs close to $500 (as opposed to 55B6P’s price tag of nearly $2000), the TV is still very high quality. Thanks to organic LEDs, the TV has amazing color contrast and shading and displays 4k quality video. The TV comes with 3 HDMI ports and 2 USB ports, so you can plug your console in, or whatever accessory you may have.

The TV also has several smart features, all encompassed in the smart remote you get with it. They allow you to switch to console or Netflix at a push of a button, without the need to mess with the cables and unplug the one and plug in the other.

There is one concern, though – the TV doesn’t seem to be as long-lasting as LG’s TVs, and several customers report having problems with the smart functions. They also have complaints concerning Samsung’s customer service.

Connectivity is provided through:

Another model in the LG range is the One LG Nano 8 Series 75SM8670PUA TV, 75-inch 4K UHD Smart LED NanoCell that fall in the mid-size range with a 75-inch screen and a 2.2 Channel Speaker System compatible with Dolby Atmos. Picture and sound are elevated with premium Dolby Vision and Dolby Atmos

The LG NanoCell TV produces near lifelike properties making you feel that you are at the center of the game or in the center front of the theater.

Content enrichment is produced by LG’s ?7 Gen 2 Intelligent Processor and it controls local dimming to control light levels. It is compatible with Alexa and Google Assistant in selected languages allowing you to control it with voice commands via the built-in LG ThinQ AI.

The use of AI in LG’s best 4K processor core produces lifelike Images, action, and color.

This TV has something really special to offer you – a personalized home screen. To avoid endless menus and buttons, TLC decided to go with a minimalistic home screen style which supports their Smart Functionality, which delivers all your favorite content with over 500, 000 movies and TV episodes, through the simple and intuitive Roku TV.

Sony delivers a dynamic range of incredible detail and clarity and an extra-wide field of view enabling you to enjoy the viewing experience from anywhere in the room. Sound is provided by the acoustic multi-audio that creates sound-from-picture reality synchronized to the action.

It is compatible with Alexa, Google Assistant, and can be voice-activated. For Apple users there it seamlessly integrates with your Apple Airplay 2 devices to stream content.

There you have a comparison between OLED, QLED, AMOLED, 4K, and 1080p technologies. We have mainly compared some 4K OLED TVs spanning a wide range of sizes and prices.

The ultra-high definition that is available in 4K TVs provides you with the opportunity to see everything in much more detail than on 1080p TVs provided your eyesight is still good and you move your seating arrangements closer to the TV. 4K will provide a better viewing experience even on lower resolution TVs.

Couldn’t find the 4K OLED TV you’re looking for in our article? You might be interested in the 5 best selling 4K OLED TVs on Amazon.com below. 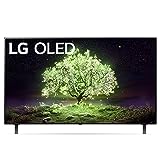